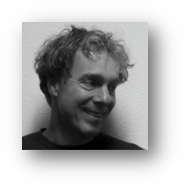 Musical biography:
Like many children I was sent to a school of music, being too small to make a conscious choice myself. After the inevitable recorder I fell for the piano (with thanks to my parents who kept motivating me during my unthankful years of adolescence).Once I took piano lessons with The Academy of Music in view. When I reached grade 5 (and one to go) however, I was fed up with the compulsory arrangements and not being allowed to play around the notes. Even Erik Satie’s music did not leave room for this, although the absence of measure and bar interested me a great deal. My first lessons in improvisation I got from Ria Klerkx. Light music suited me a lot better, although the exact reading of music deteriorated quite a bit. In those years my admiration for Ray Manzarek (The Doors) and jazz pianist Keith Jarrett came into being.

My first band was called both ‘Serenade’ and ‘Kapel Kwintet’. No cult names, not to mention fancy music. This band was really a small orchestra playing music for the elderly. I joined this band for eight years, and, opposed to the image, I had a great time. We played the whole repertoire in the Realbook way and every month we had an opportunity to perform.
I started a course in the Theory of Harmony, but when after two years the musical instrument was left out of the picture, the fun was over for me. In those days I made my acquaintance with creating my own music as a guest pianist on the demo cassette (!) of the new wave band ‘Isle of Man’ from Paul van Melis.

After having used up several cover bands, amongst others the successful ‘Spinal Cracker’ and after having played in the orchestra pit of two musicals from Koskoier (Gemert) I ended up with ‘Crimble Cromble’. With this band I made two CD’s in 2000 and 2001, containing our own psychedelic music. An exciting time where we caught the public eye with (radio) concerts, radio 3FM and even a TV-8 special on the local ‘Omroep Brabant’.

And now this! I must say that I had never been much into the Beatles. Consequently I missed a lot for many years. Fortunately, with the Beatles it is never too late! Besides, a nicely deranged Beatle virus prevails in BeApple which has completely infected me by now.